Once upon a time there was a stock pot,
well actually our story starts before this photo... 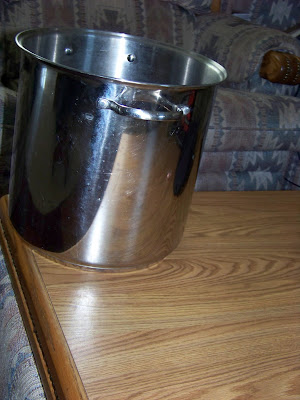 A month ago I bought a little chihuahua/pekingese mix to be my new baby. Hubby's basset Reba Marie and my new puppy, Frankiebaby became fast friends. 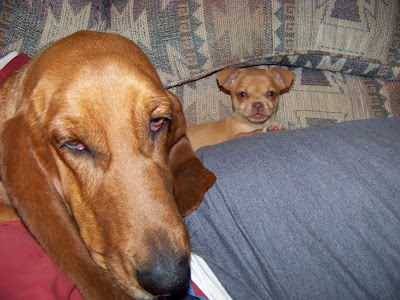 However, Reba does not play with the puppy. Reba has never had puppies, and after every heat she 'bags' up. This time it wasn't going down. And that was because Frankiebaby has been nursing, and Reba has not stopped her. 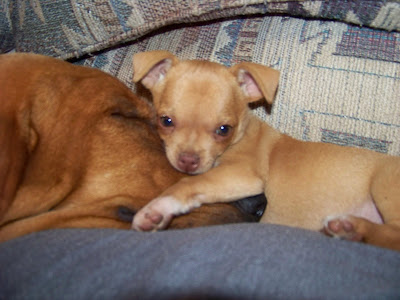 This brings us to back to the stock pot. I wanted a kitten for Frankiebaby to play with. I felt it was a shame to 'waste' all that milk Reba has when so many baby animals need good mama milk.

On Monday I called the local animal shelter to see about getting a stray kitten. I left a message, but no reply. Tuesday I was in town with my son, and we just so happened upon the animal control truck, and I spoke to the lady. 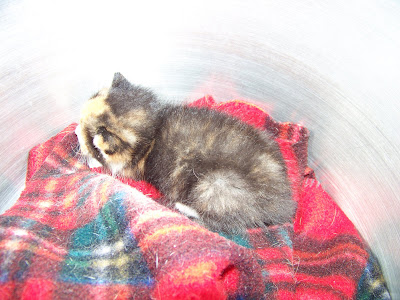 She told me she had just taken a stray kitten from a dog (who was playing with it), and dropped it off at the vet. It would need to be bottle fed. I told her I had a lactating basset and we could try to feed her on Reba. 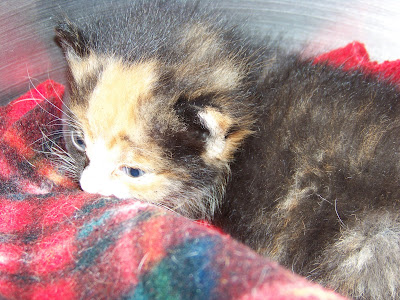 We were both so excited!!! Perfect timing!!! I brought her home Tuesday. Tuesday night Reba Marie washed her top to bottom. It took a little effort to get her used to the bigger size teats, but she is catching on fast!! 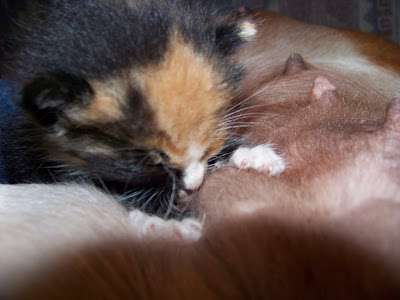 Reba is doing great, and when the baby cries she comes to see what is going on. 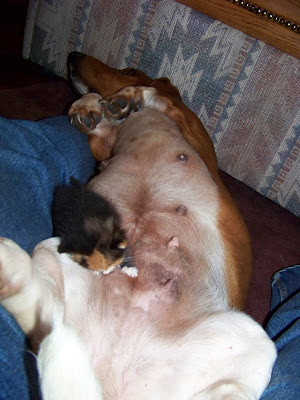 As I said, Reba has never had puppies, or ever nursed ANYTHING before.

She has never washed babies, or cared if anything cried.

Reba Marie is 5ish, and a virgin. 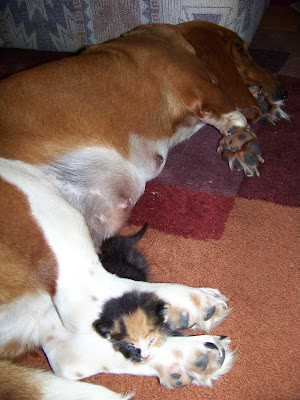 You don't have to have babies to be a 'mama'. 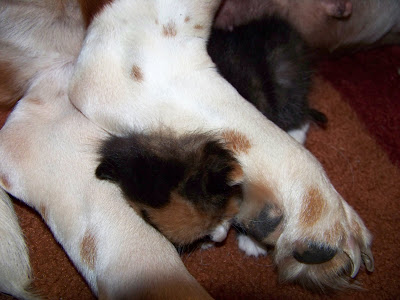 Perfect timing, or intervention? You tell me:) 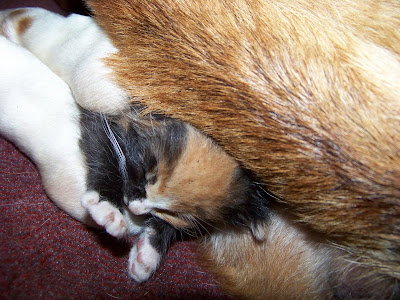 {What does this have to do with a stock pot? That is where I'm keeping the baby until I feel she is ready to stay in the washroom alone with Reba}

Have a great weekend!!!!

Check out Camera Critters to join in or see others:)

Awww, you are gona' make me cry. I love your story. I think it was Godly intervention. Keep us posted on how the little on does.

Never have had animals to take care of and you have educated me today. Heart warming story.

Wow, what a story. I've never heard of this. I wonder if it is common for a dog in season to produce milk. Your family is sure growing fast. I wonder what you'll get for the baby since you got baby for the puppy. The kitten has the coloring of one we had when daughter was young. She called it Pumpkin because of the oarnge and black. The puppy and the kitten are both precious. I think probably, It was a God thing. Imagine seeing the animal control truck just when you're looking for a kitten.
Blessings,
Mama Bear

Hi!
Awesome story and photos! That's so nice that Rebba lets the kitty nurse! Have a great day!

How sweet that your basset gets to be a mommy. Cute kitten and puppy.

Oh my word, that is sooo sweet. And you are absolutely correct, you don't have to give birth to something or someone to be a good Momma!

Hi! You visited my blog in January during the One World One Heart Giveaway.
My new mystery novel KEEPING HOUSE: A MADAME PRESIDENT MYSTERY is out now,
and my publisher is offering the OWOH bloggers a 10% discount.
The promo code is DAT10.
My website is www.thehousemysteries.com.
You can link to my publisher and the promotion there.
Thanks for blogging!
Denise

How sweet - that pic of Frankiebaby and Reba is adorable!

That is such a sweet story.

I enjoyed catching up with you, Carla. Your flowers are lovely and congrats on the new graduate!

Aw how sweet!Let's know how things are going.

Oh my gosh, this is the best post ever. I love animals and this just reafirms my belief that animals are so much smarter than we give them credit for. They are so capable of giving love. Your puppy is adorable.

That is SO awesome! I have never had a female dog that wasn't fixed. I didn't know they started producing milk in conjunction with going into heat! I love the photo of the kitten laying on Reba's tummy nursing.
Blessings,
Lorilee

Just had a minute to catch up on your beautiful blog--all the blooming beauty and then I come to this--LOVE it---on so many levels!

Awwww that's so stinking awesome!! You certainly DO NOT have to give birth to be a MOMMA!!!!!!!! Way to go Reba!

(I didn't know animals lactated w/o having had babies...wow!)

I though I left a comment here. I love what she is doing. It was a great Ideal.