Son-Day: "Shall We Gather At The River"

Shall We Gather At the River?
Words & Music: Robert Lowry

Shall we gather at the river,
Where bright angel feet have trod,
With its crystal tide forever
Flowing by the throne of God?

On the margin of the river,
Washing up its silver spray,
We will talk and worship ever,
All the happy golden day.

Ere we reach the shining river,
Lay we every burden down;
Grace our spirits will deliver,
And provide a robe and crown.

At the smiling of the river,
Mirror of the Savior’s face,
Saints, whom death will never sever,
Lift their songs of saving grace.

Soon we’ll reach the silver river,
Soon our pilgrimage will cease;
Soon our happy hearts will quiver
With the melody of peace.


Yes, we’ll gather at the river,
The beautiful, the beautiful river;
Gather with the saints at the river
That flows by the throne of God.
Posted by Carla at 9:17 AM 1 comment: 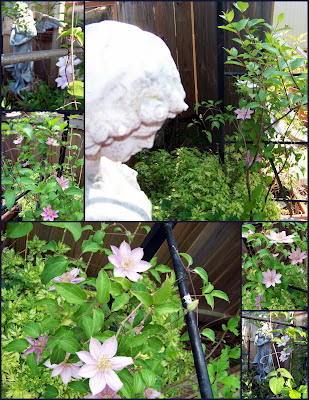 I'm so happy to share all these Clematis blooms!!!
First multi-blooms I have EVER have!!
I think I planted this two years ago, and not only am I happy its alive, but even more happy about the blooming!!
WooHoo!

Happy Blooming Tuesday :}
Posted by Carla at 9:58 AM 8 comments:

This song has really been on my mind lately, so much I had to dig out my vhs tape and watch the movie it came from, "The Prince of Egypt".
I'm so aware I can't see the whole picture, or my part in the 'plan', but my Heavenly Father can, and does, and is right by my side as I travel, just waiting for ME to turn to Him for guidance.
Thanks God!!
God bless...

A single thread in a tapestry-
Though its color brightly shine-
Can never see its purpose
In the pattern of the grand design.

And the stone that sits on the very top
Of the mountain's mighty face-
Does it think it's more important
Than the stones that form the base?

A lake of gold in the desert sand
Is less than a cool fresh spring-
And to one lost sheep, a shepherd boy
Is greater than the richest king.
If a man lose ev'rything he owns,
Has he truly lost his worth?
Or is it the beginning
Of a new and brighter birth?

And that's why we share all we have with you,
Though there's little to be found.
When all you've got is nothing,
There's a lot to go around.

No life can escape being blown about
By the winds of change and chance,

So how do you judge what a man is worth?
By what he builds or buys?

Question (posted on his forum at stephenschwartz.com) ... Do you have any interesting memories or things you could share of either the process of writing the lyrics and/or music to Through Heaven's Eyes and/or the process of getting it recorded? And did you choose Brian Stokes Mitchell to play that role or did somebody else?

Answer: ... "Through Heaven's Eyes" is my favorite of the songs in PRINCE OF EGYPT. It was actually the fourth song I wrote for that spot in the movie! The first three were more comedic and were essentially plot-driven, encompassing Moses' time in Midian. The first was called "All in the Attitude" and was kind of a comic number about how poor they all were, and the next two, called "Don't be a Stranger" and "One of Us", were about welcoming Moses into the tribe. For a while, we were going to go with "One of Us", but as the picture developed, Jeffrey Katzenberg began to feel that we needed something more philosophical and thematic in that spot. As we all began to think about it, one of the directors, Steven Hickner, came in with a poem called "The Measure of a Man", and I based the lyric for the song on the philosophy in the poem. The casting of Stokes was partly at my suggestion, since I knew him a bit, but it was a group decision.

Some of the specific images (the "stone on the mountain-top", for instance) were certainly influenced by my trip to the Sinai desert in Egypt.

My Shasta Daisies are blooming... 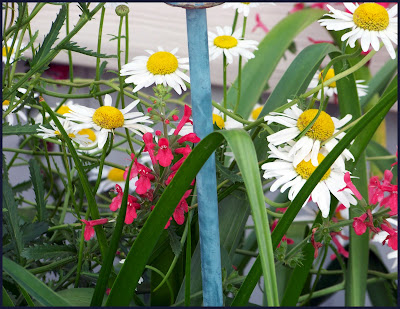 (Shasta Daisy with Texas Betony)
Blooming like crazy, flopping and laying on everything, you could probably call these stringy, 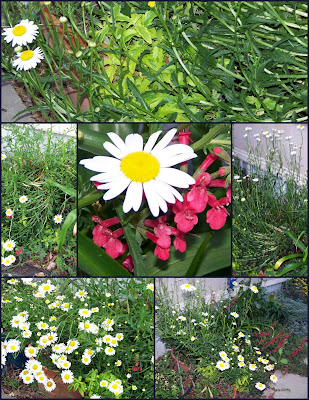 Must be because of all the rain we have had.
These are in a pot, when I put them in the ground, I think I'll put them with a 'stiff stem' plant to give them some support.
Daisy says spring, so it must actually be here!!
(Really its ALMOST the dreaded summer for us:( )

Fertilizer Friday at Tootsie Time
Posted by Carla at 8:17 AM 6 comments: