Boy o boy, its getting hot down here in East Texas. Summer comes early and stays a long time down here.

I bought Job's tears this year. The seed catalog said the seed pods could be used as natural beads (the holes occur naturally as the seed pod dries), also it is edible. The seeds were tear shaped and quickly grew into short corn looking plants. 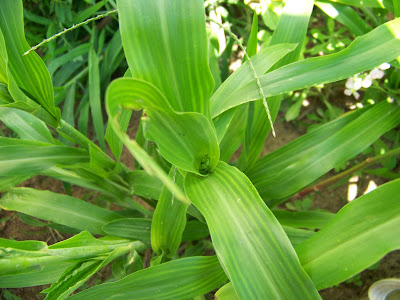 I was surprised to see these grainy seed looking parts, THEN this bulby part appeared!!! 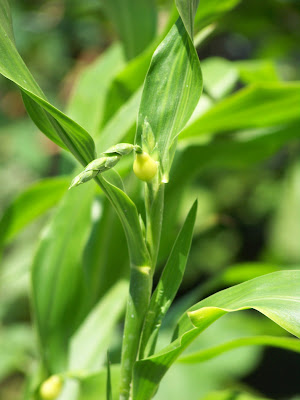 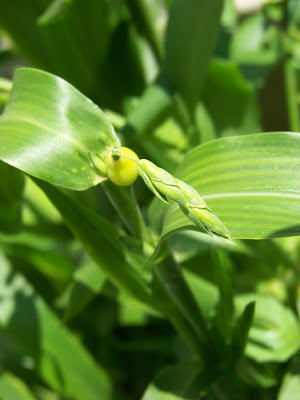 TOO cool!! As they get longer they drape and wave in the wind. Lovely:) 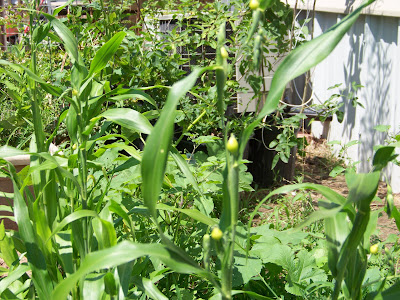 From Website Wayne's Word (an online textbook of Natural History):
This is a super cool website, especially for anyone homeschooling. This plant grows super fast, you can dissect it, examine it, and use it for crafts. Too cool!!! 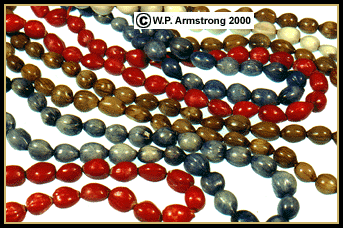 An assortment of Job's tears (Coix lacryma-jobi) necklaces. The natural pearly-white beads can be dyed or painted various shades of colors.

Job's Tears As Food
Native to tropical Asia, Job's tears (also called Adlay) are used for food, particularly by peasants of the Far East. The distinguished 17th century naturalist Georg Eberhard Rumphius stated that in his day Job's tears were planted in Java and Celebes on the margins of rice fields. According to Agnes Arber (The Gramineae, 1965), Job's tears were introduced into China in the first century A.D. by a Chinese general who conquered Tongking, where the grains were widely used as a cereal. The general became so fond of Job's tears that he carried back several cartloads of the seeds to his own country.

Like other cereals, there are many cultivators of Job's tears, including soft-shelled, easily-threshed types with a sweet kernel. In some, the hulled grain is adapted for parching or boiling like rice, while in others it can be milled, ground into flour and baked into bread. Reportedly, the grain has a higher protein content than most cereals. The grains are also utilized in soups, porridge, drinks and pastries. In India, the Nagas use the grain for brewing a beer called zhu or dzu. A Japanese variety called "Ma-Yuen" is brewed into a tea and an alcoholic beverage, and roasted seeds are made into a coffee-like drink. According to Agnes Arber, the leaves are used as fodder in parts of India, and are especially relished by elephants. 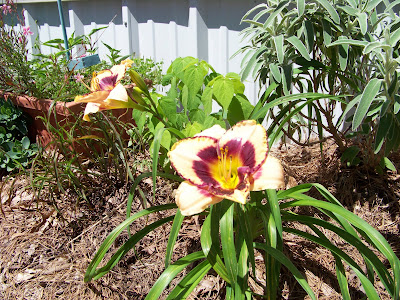 {a Hebrew word meaning peace, completeness, and welfare and can be used idiomatically to mean both hello and goodbye} 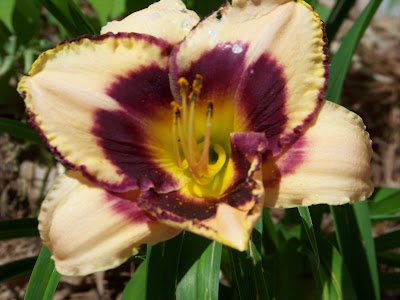 Happy Bloomin' Tuesday!
I'm joining MsGreen "thumb" Jean for Bloomin'" Tuesday! Come join in or see others!
Posted by Carla at 7:11 AM

What an interesting plant. I trust you will make something from the beads and share with us at a later date.

So that's what Job's Tears are! Very interesting and beautiful.

Very cool indeed! Love your plants! we lived in Corpus for a while and I know all about the long summers. That's why I'm up here now where we have long winters. :)

Hoe cool I will have to get one of those too. The beads are awesome. I am doing better. Had a couple days of energy so I rest today.

HI!
I have heard of Job's Tears, but never saw one before. Thanks for all the info and the beautiful photos! Have a great day!!

Very interesting! This is the first I've heard of Job's Tears. The plant does look like corn, and the beads it produces would be good for crafts. What fun!
Aiyana

What a cool plant! Must be fun to watch. That's one of the best things about Bloomin' Tuesday, seeing different and interesting plants. Love the daylily too! Great post! Jean

I've never heard of Job's Tears, but aren't they neat! Where did you find the seed, that might be something I want to try next year.

WOW...Job's tears are so cool! I will have to look more into them :)
Just beautiful!

We have been having 'June bloom' around here. FOG! But, finally the sun is out. And the kids are out so I think I NEED to do some gardening today.
Wendy

That's a very cool plant! I've never heard of it before. I like plants that are versatile and this one certainly is.
Manuela

Very interesting plant. I think I will have to try growing Job's Tears.

You have received an award on my blog if you would like it.
http://briana-icantdecide.blogspot.com/

Jacob's Tears is a cool looking plant Carla. I've heard of it but never seen it. So much interesting history to some of these plants, huh? :)

I have heard of Job's Tears but had never seen a plant. Thanks!

Thanks for the lesson, I'd never heard of Job's Tears before. I love the beads!

I've heard of Job's Tears, but have never seen it. Thanks for sharing. The daylily is gorgeous! Will look for that one. ~~Rhonda