When I'm Away From You


When I'm Away From You
Bellamy Brothers


When I'm away from you well, I can't stay still
My thoughts won't move from the way I feel
It happens time and time again
And the circle never ends

Picasa won't let me post pictures. It says I have exceeded my 'free' limit. SO...I'm trying a new blog on this same account. Come see me at A Mellow Life Is A Good Life #2
Posted by Carla at 4:09 PM No comments:

Beautiful Ending Barlow Girl ~God bless~
Posted by Carla at 3:00 AM No comments:

What would have me up before the sun??? 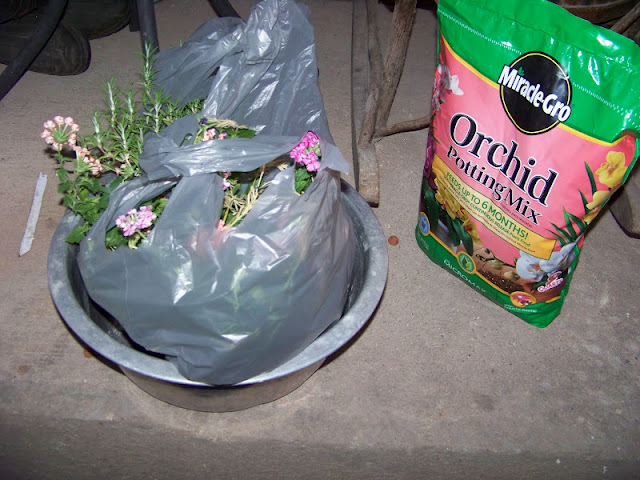 Also trying to 'play' in the dirt before THIS
woke up.
Didn't happen.
SO after grandboy, Kale, had some breakfast, we went back out to the front porch to do some 'dirty' work.  Ok, not really work, but we did get good and dirty.
Mr. Kale stayed on the porch while I re potted.
First playing with this super cool watering can-sprayer thingy. 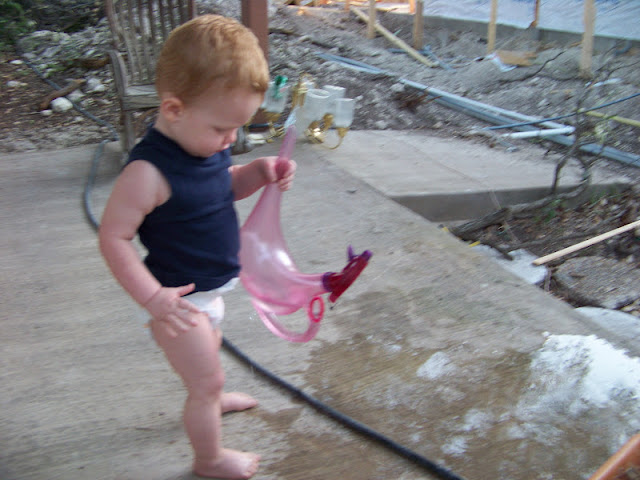 Kale demonstrating how NOT to use the watering can:).
Shortly after I had to put it up, because SOMEONE was chewing on it.
Little beaver boy. 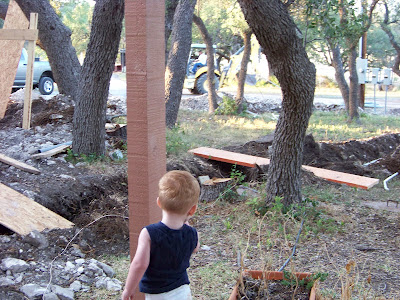 Mr. Man enjoyed watching the machinery from the work site next door.  Wish this little guest house had a glass door so I could leave the wood one open and he could watch the activity all day. He is able to catch some action from a side window.  Poor tortured soul. 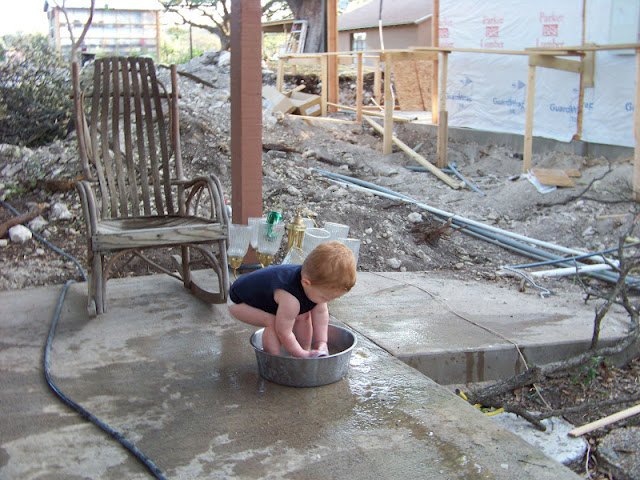 Then we upgraded to a dog water bowl full of water and a cup.  This lasted the longest.

I decided to add my new treasures to this grow pot (which is so cool).  It is a self watering pot. I brought three with me, but since the homeowner already has a garden, and all my food plants were murdered died, I don't think I will be using two of them. 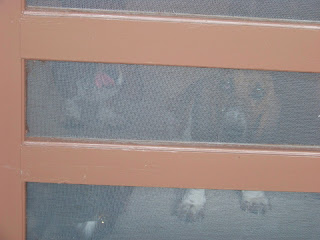 The pooches watched from inside, until SOMEONE started pouring water on the screen door, and I had to close it.  Poor pooches. 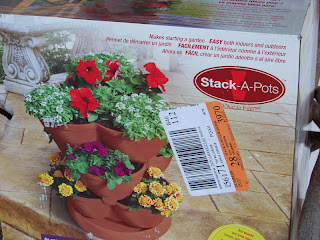 When we went on our road trip to Wisconsin, I saw one of these at Target, and bought it for a souvenir.  I decided it would make a nice 'salad bowl'.  (I have a smaller one with succulents back at home)  I'm going to try salad greens in the summer.  They are not recommended here in our hot weather.  We'll see-won't hurt, that's for sure:). 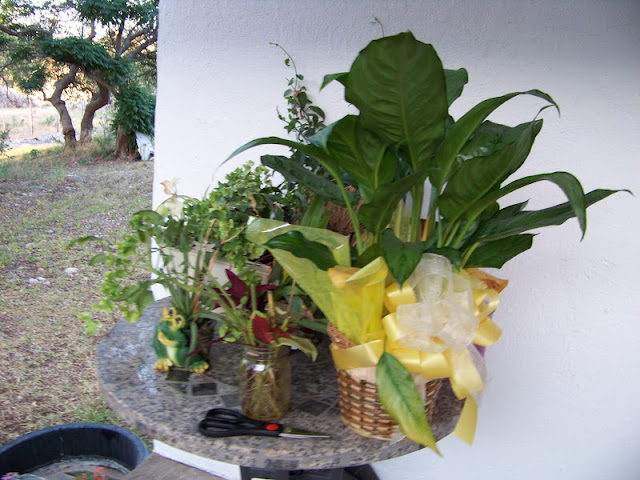 Today's players:
At the Lowe's clearance rack I found:
healthy rosemary (which I needed) 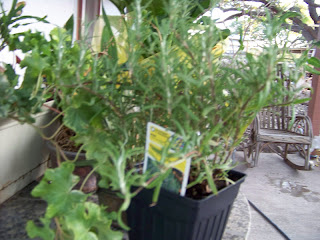 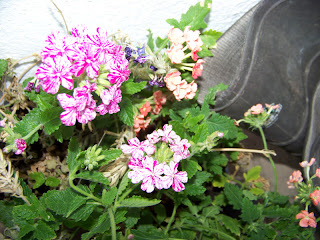 And three different verbena (which I wanted;)
We have a solid red and purple at home.
These are hardy in our neck of the woods.
I hope these live.  They were in one of the pots hubby DID NOT water while I was away.  Shampoo Ginger.
Mail order.
Cha-ching.
Boo hoo.
Boo hoo. Took him a while but, he finally sat in the bowl.  Fun, fun, fun!
Ta-Da!!  Over planted, and I don't care.  I'll be taking it home this fall and putting it in the yard, so right now it is 'intense' planting.  :)

Now to my sad sad orchids. 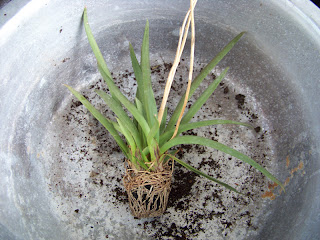 My mini Sharry baby, who bloomed so well for me this spring.  No medium left.  how long can the poor dried up thing function on nothing?  So shriveled.  :(  I'm trying a new orchid 'soil'  we will see how it does. 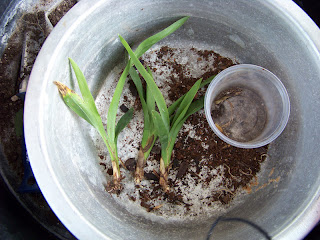 My other Sharry baby.  I took a deep breath, and just ripped all the shriveled parts off.  All that was left was these three tiny babies.  :(  At our old house (before we moved to mom's) this was in my bathroom, and was thriving.  Then it got neglected and it is barely surviving. 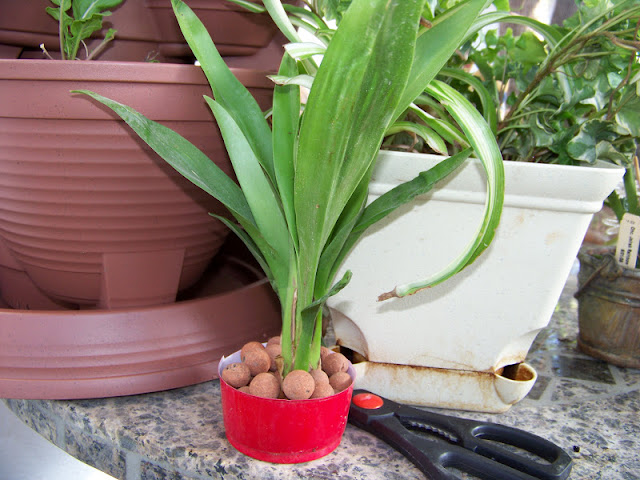 Currently I'm using the bottom of a plastic cup, later I'll switch to one of those small clay pots.  *sigh* 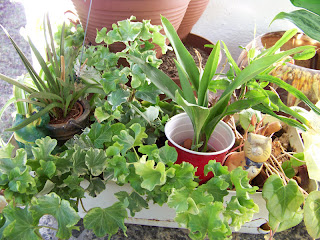 I put them back in the planter they sit in, used the cut off part of the red cup as a 'brace' for the orchid.  Nothing else holding it up.  *sigh*  Like I said, I hope they like the new orchid soil. 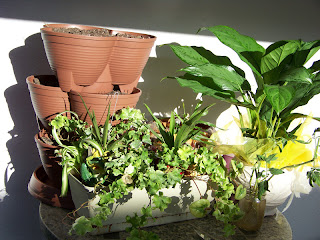 That stack a pot thing in back (REAL hard not to put my new flowers in it, but its only for edibles:), window box planter, and dumb cane.  Had to move that dumb cane before the sun REALLY hit it. 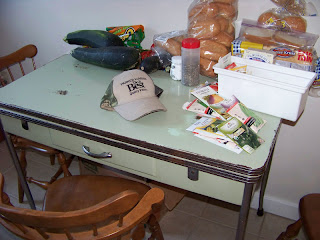 Went thru my seeds.  Can't decide what greens to plant in the salad bowl.  Other than mescalin, spinach, kale (the plant not the grandchild) beets, rocket, any suggestions?   I've got lots of spots.
One more look at my new watering can.  First, its purple.  I love purple.  Second, its thick plastic.  Third, it has a SPRAYER on it!!!  Fourth, its see through!!!  Fifth, its got a nice handle for hanging.
And sixth, its cool looking:)
Gonna enjoy this one.
{Silly son asked why someone would want a sprayer on their watering can!!  I have failed as a mother.;} 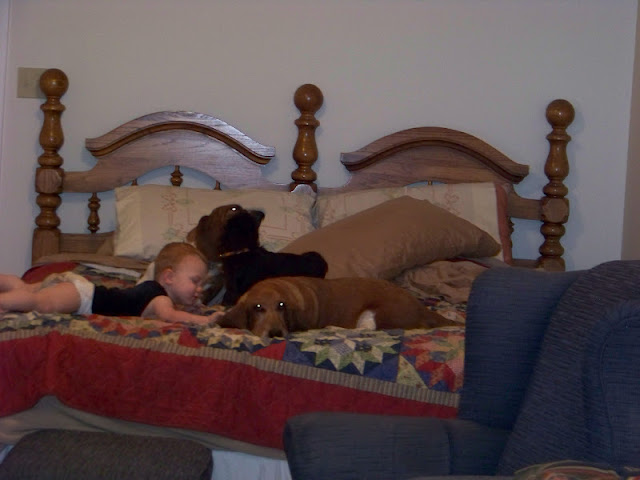 Back inside everyone was frolicking on the bed.  Oh, the silliness!! 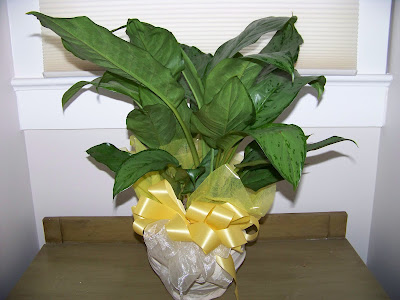 The dumb cane (b-day present from hubs) was upgraded to this cool planter.  (Just plopped in)   But, I'm going to have to remove all that plastic wrap and ribbon, it hinders my watering skills.
(and we don't need that hindered:). 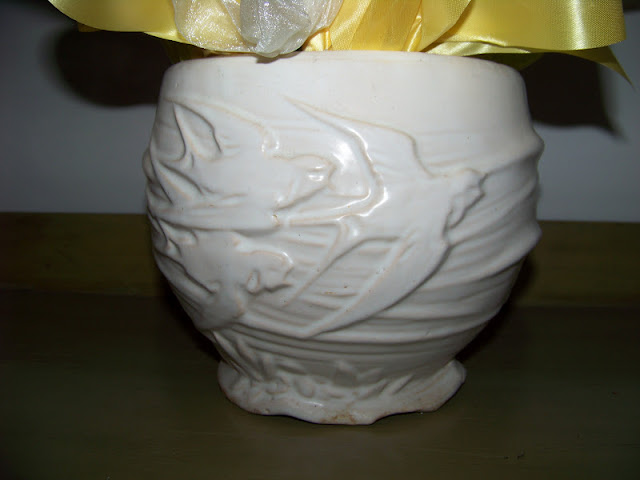 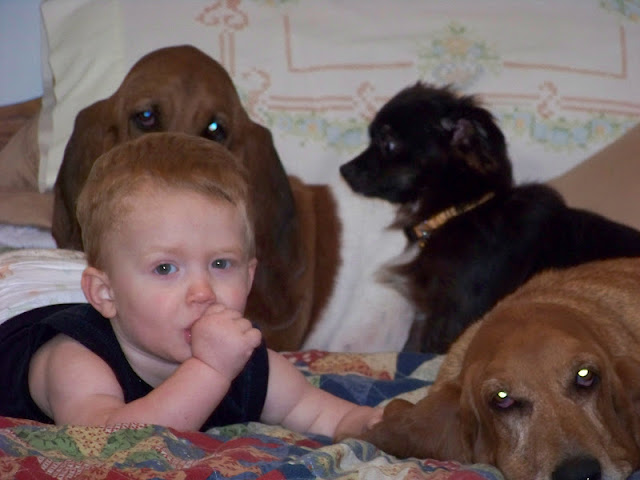 Tired baby.  He is so wore out.  Water does that for some reason.  Kale likes to suck his thumb and rub a 'silky' when he is tired.  Here he is using Reba's ear, she doesn't mind.

Hope your Fertilizer Friday is fabulous.
Posted by Carla at 11:21 AM 3 comments: