For the first time in probably my whole life, I left my home for TWO WEEKS!!!
TWO WEEKS!!
Hub's work allowed us a two week workcation and we were super excited!!!
For my 45th birthday, I REALLY wanted to go see my step-son Aaron, and step-daughter Tiffany (and fam), which I haven't seen in three and a half years.
This made it possible.
AND as a bonus, we were going to be able to see my baby Taylor (and fam) who moved in January.
(Thanks Powers That Be:)
Looks like we are moving doesn't it?
We were driving in a truck so we had lots of room to take 'extra' stuff that my son left behind when he moved in January.
My son, Taylor, talked hub into bringing him a basset puppy.
It just so happened the breeder who we bought our Ladybelle from had a new litter,
AND it was on the way, so we stopped and picked up this darling.
Day One: we left Texas, and made it all the way to Kansas.

Day Two: IOWA!!
We detoured to John Wayne's birthplace.
Hubs loves the John Wayne, and so does the son we are visiting last.
We had to have a picture of his new puppy in front of  the Duke's home.
We didn't inside for the guided tour, we really wanted to keep going...

To see this guy!!!  Step-son Aaron!!!
Aaron is going to Iowa State, a
nd he graciously gave us the grand tour of the college (so pretty),
his concrete engineering projects (very interesting),
and town.
Thank you, Aaron, for sharing yourself with us!!! 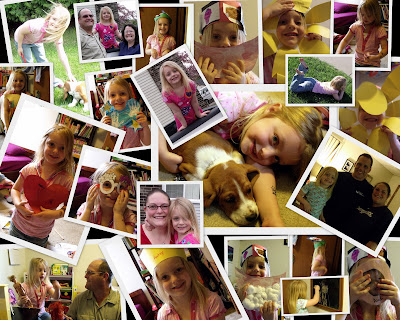 Day Three: Wisconsin!!!
How wonderful to see Step-daughter, Tiffany, her hubby Colyn, and darling four and a half grandgirl Audrey!!!!
Audrey modeled all her 'school work' for us (what a beautiful ham:),
loved the puppy (so did her mom and dad:),
counted to 50:),
drew us orange juice with extra fruit,
and was just darling.
Thank you Tiffany, Colyn and Audrey for sharing your sweet family with us!!
to be continued...
Posted by Carla at 4:53 PM