Due to recent security concerns, our Good Queen Uno has ushered an official command.
The Kingdom is relocating its head quarters.

The Royal party has been much involved, and always on hand to assist the servants in the organizing, and actual moving.

As an always prepared Queen, paw-to-paw combat training has continued for those involved in the Outlying Peasant Pooch Peace Talks. 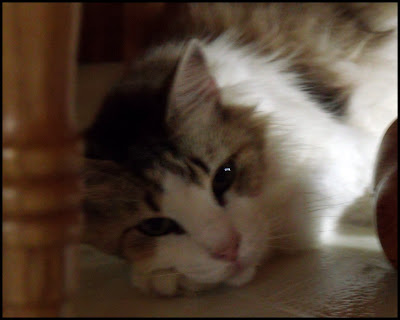 Our Good Queen feels secure in her decisions...and wishes all a blessed day...
(This message has been approved of by Queen Uno)

It is official, I set a date, told my landlord, and have begun the packing.
We are moving:).
We only planned on staying here until my youngest graduated (to keep him in this school district), and that was two and half years ago.
August in Texas is a terrible time to move (105 degrees and holding), but I'm doing it!!

Hubby is so agreeable, "you pack it, I'll move it" he says.
We have enjoyed ourselves here, but my mom's is where we really want to be.
Half our time will be at my mom's (old family home place), the other half with be with hubby in the camper (parked where he works two hours away).
My kitties aren't really interested one way or another.
Well, maybe the kitten, but Uno and Blu have other things on their minds.
Blu now plays with the kitten, George, but doesn't sleep with him yet.
He is a TOTAL pest, and completely perfect for our little kingdom.
Ok, back to packing...
Have a wonderful Tuesday!!

Hello! Thanks for visitng us. You are really cool cats!

Even when the Kingdom is moving there is a paparazzi to take pictures of the Her Royal Highness and the rest !
where is the new Kingdom located ?

Hope efurything with your move will be OK !
Sounds like no fun to do it when the temperature is 105 degres though.
Mom say´s that she never wanna move because she knows how much junk she and dad have ;-)
Thank´s for your comment on my blog :)

Hope the move is smooth sailing. I'd help but I see you have enough snoopervisor on site.

Moving in such hot weather doesn't sound much fun.
With Queen Uno organizing and running things, everything will go smoothly.

Hope the moving is smooth. Purrs!

I hope your new home has a beautiful garden for you to enjoy!