Black Sunday, The Peace Treaty has been Violated!!!!

Life with a Monarch is a delicate thing.
Queen Uno has declared COMPLETE reign for many years.
She is a kind ruler, allowing her subjects MUCH freedom.
After seeing to her needs, her subjects may go about their business,
AND Queen Uno goes about hers. 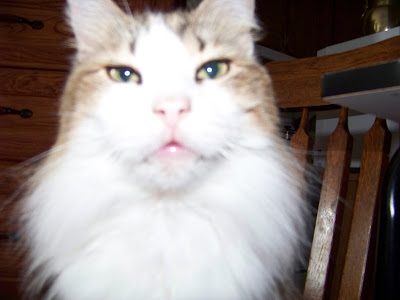 It was ok when the subjects took it upon themselves to bathe the dumb dogs.
Dogs, unlike cats, NEED a bath every now and then.
AND they are owned BY the people,
unlike cats which OWN the people. 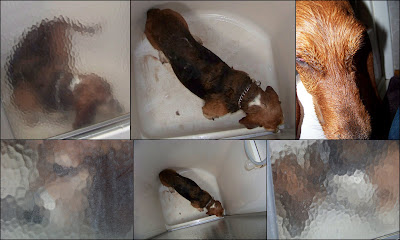 left her to fix the mess they had made. 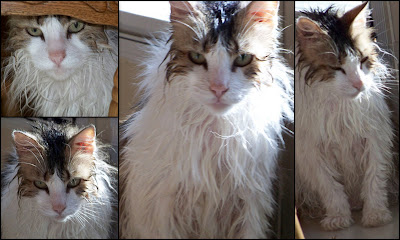 Queen Uno did not go down without a fight,
there much protesting in the form of yelling and screaming
(on both sides),
much blood was shed
(on the rebel subjects' part-NOT the Queen's) .


On Monday, the Queen reviewed the Peace Treaty with her disloyal subjects.
They WILL think twice before pulling another coo such as this again!

She may have lost the battle,

BUT Queen Uno has won the WAR!! 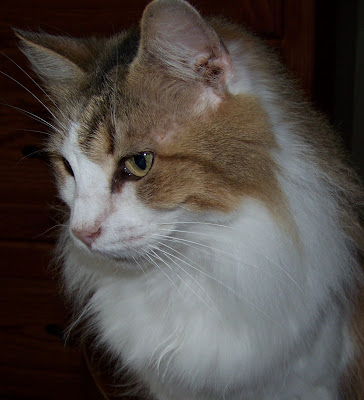 
Check out Camera Critters to join in or see others:)

You are braver than I, I would NEVER try to bath a cat again. Hubby brought a stray home one time, covered with fleas, patchy hair, and in general bad health. I flea bathed him and looked like I had been in a battle with a weed eater, briar patch and barbed wire. The good news is after being bathed, wormed, defleaed, and fed vitamins the wonderful blue eyed siamense looking alley cat grew into a happy, content eighteen pounder and lived with us many, many years.

What a beautiful cat she is! How dare someone douse her with water! She must have felt "common."
Brenda

LOL! You write amazing stories. She will be much harder to catch next time.

LOL! Thanks for the laugh, Carla. I think every dog we've had owned us... so I disagree on that part :-)

Very funny. I don't think I would try it with my kitty.
Thanks for visiting n sharin. I am having computer problems it is so frustrating. Not able to post.
Take care.
Blessings,
Sherry

HAHAHA! Awesome and cute post! She looked adorable in her wet fur. Nice capture of her at the end too.

She's a beautiful cat. especially after she's all cleaned up. She doesn't look very happy in the wet pictures, though. Looks like she's giving you the evil eye.

that is just too funny! Long live the Queen LOL

oh my, that is the most beautiful cat! what a perfect animal!

Absolutely hilarious!! There's a queen like this at our house, too!

I would be shred to pieces for doing that to 3 of my 4 kitties! The other has a strange fascination with the shower, and had a bath the week we rescued her from death, so she'd deal. Just hope revenge doesn't come in the form of a wet bed.

I would be shred to pieces for doing that to 3 of my 4 kitties! The other has a strange fascination with the shower, and had a bath the week we rescued her from death, so she'd deal. Just hope revenge doesn't come in the form of a wet bed.

I'm fortunate I've got short-haired dogs without much D.O. (doggy odor), and the only time they need a bath is if they roll in something particularly nasty (there was an incident with a dead seal at the beach last summer... ick).

My cats actually like it when I give them a "water down" on a hot day... I use the water can and poor the water all over them, rubbing it in to their skin. They hate it when their paws get wet though!

She is beautiful! My cats would never let me do that...!

If you have a chance, please check out my camera critter:
http://eightymphmom.blogspot.com/2009/04/camera-critters.html

Uno, you are just beautiful and you have owners (subjects ... sorry) who are a lot braver than I could ever be. You are one lucky kitty.

excellent post very interesting and I love those wonderful pictures of yours, beautiful. Visit my flamingos here, also my colorful parrots here, thanks for the visit and happy one year anniversary to you.

This was funny. Queen Uno you are too much.

She does look very formidable!

My mom person does not bathe our cats, she says she likes to keep her flesh in one piece.

Wow, you have so adorable camera critters here on your blog! It's very amusing to read and see every post. Long live the Queen :).

Oh, it happens every so often that I have to give our Onyx a bath and she doesn't stick around long enough to photograph in her soggy condition. Poor Uno. :)

Hihihi! I can clearly see the anger of the Queen wet after bath! :-) Excellent CC post! :-)

Those 'wet looks' are priceless! Greats shots and long live the queen!

bathing a cat is like wrestling an alligator only more risky!

she is a beauty, even soggy

Oh my gosh - this is an awesome post! I loved EVERYTHING about this post. You are very talented!